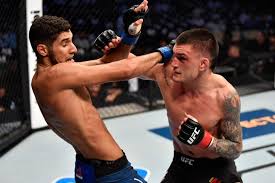 Don “Magic Man” Madge wins again in the UFC, this South African phenom, has been drumming the beats of greatness according to his loyal fans since his days of fighting wars in Thailand, doing Muay Thai. Honing his craft, the former Light Weight Champion of EFC, burst into the mma scene winning and losing, but most importantly, he left his mark and is 2-0 in the UFC thus far, winning unanimously against Fares Ziam from France.